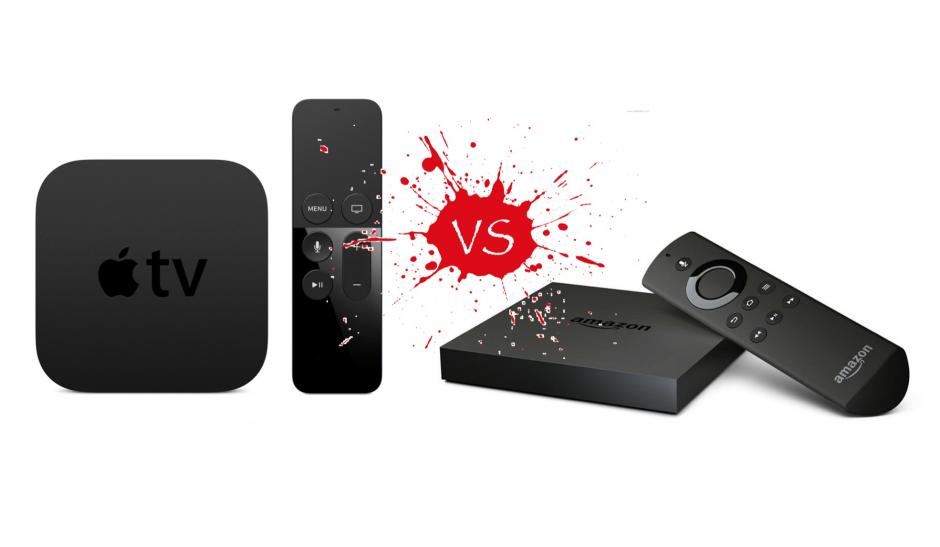 Apple TV and the Amazon Fire TV does the same things. They run a full version of their respective company’s operating system. They can run apps, and have access to their respective media libraries, and can stream the video and much and even play games and control things through your voice.

Both the Apple TV and Amazon Fire TV can handle the 4K resolution videos but can get the Amazon Fire TV for a much lower price than the Apple TV. You can stream videos and music and can play the game and has apps, and does the smart stuff. But it is the little things where the Apple TV starts to stand out in the specs department. Apple TV is the set-top box. You’ll need some room for it somewhere. Fire TV is an HDMI dongle which dangles off the back of your TV or receiver.

Apple TV also has better hardware, but the Fire TV has more affordable hardware. Then there’s storage. While neither it handles external hard drives, Apple TV starts with 32 gigabytes of onboard storage, with the option for double that for just $20 more. But the storage depends on how much your usage is. If you are not downloading a movie after movie or loading up the huge game and all you are doing is merely streaming the video or music, then the 8GB might well be enough. But still larger storage is always better.

Processor and RAM are better at Apple, and it performs very powerfully. Apple TV can do both the HDR10 and Dolby Vision, which makes the colour pop. But the Fire TV only does the HDR10, and If you want to choose something better, it will be the Dolby Vision.

Related: Apple TV vs Chromecast | Which is Better for ‘Casting’ to Your TV?

When it comes to libraries iTunes was the first, and it is huge. But the Amazon is not all the far behind it. And given that so much of what we watch and listen these days is available on merely about any and every streaming service – save for exclusive content, of course –  it is mostly a push. You can even find things that Apple TV has, but the Amazon doesn’t. You can load up the Amazon Prime Video app on Apple TV when it is already built into the Fire TV.

You’ll be hard-pressed to find content which you can’t watch on either of these devices. If you use iTunes Match and want to play which the music over the TV or the entertainment system, then Apple TV is the way to go. If you don’t care about the local music in slightest and want to stream things, and you can do that just fine on Fire TV.

All the primary streaming services are available on both platforms. You can’t get iTunes content on the Fire TV. But you can get Amazon content on the Apple TV. Google content is out. But the apps like Movies Anywhere bridge that gap a bit. It is going to come down to the edge case. If you have the group of contents purchased on single service. Then just stick with their hardware, too. It’s now more comfortable and more enjoyable in the long run.

There’s a good chance you are going to spend a lot of time with the remote control in your hand. The Fire TV remote is functional. It won’t win any awards for design, and it uses AAA batteries instead of having something internal and rechargeable. But it works, and it works well, and it also serves as a voice controller for Alexa.

Apple’s “Siri Remote” yes, they gave the damned thing a game – is the bad remote control. It lacks any economics whatsoever. It likes to pretend the Menu button is a Back button, except for when the Menu button is the Home button, Or when it’s a Menu button. Or when you want to use a swiping and not-a-directional -pad to bring down what otherwise would be considered a menu.

And Siri Remote charges over the Lightning, so it uses the same cable as your iPad or iPhone. That’s fine if you are the sort of a person who has the Apple devices laying around. It’s probably not fine if you bought an Apple TV because you prefer it but don’t own a lot of other Apple stuff. No. Don’t use the Apple TV remote. At least

Everything has to be “smart” and “connected” these days. So to that end, Apple TV has Siri baked in. You can do a lot of things – but not quite all the things. The Siri can do your phone or tablet. Apple has the bonus of being a HomeKit hub. Siri is integrated across devices, Alexa is ubiquitous.

On the other hand, Amazon Fire TV has Alexa. And if you have used Alexa at all the past year or two, you know that it mostly just works. And everything – damned near everything works with Alexa these days. With the quick voice command, You can tell the Fire TV in your backyard to show your doorbell camera. It’s very cool.

The best TV for you may depend on which ecosystem you are in. If you are committed to HomeKit, Apple TV is the way to go. If you don’t care, Fire TV is seriously economical.

If there’s a leader in the accessibility space, it’s Apple. That is, adding features that help the hard of hearing or visually impaired or some other physical thing – basically anyone who may need a little help to use the piece of tech.

Apple TV has a wealth of accessibility options, from captions to VoiceOver to audio balance and video contrast.

Fire TV has new accessibility options as well. There are captions, of course, and also it’s own “VoiceView” screen reader, Plus high contrast and the screen magnifier.

Amazon is very less in price when compared to its competitors. But when it comes to daily usage, Apple TV is a lot faster and more flexible, and it can run applications quicker on it.

But Fire TV is also pretty capable. In fact, it’ll work just fine for the most folks, especially given how inexpensive it is. But if you wish to use it every day, it would be better to spend some money on something little more powerful. Two streaming devices mostly do the same things. One does them better – and the other is far less expensively.