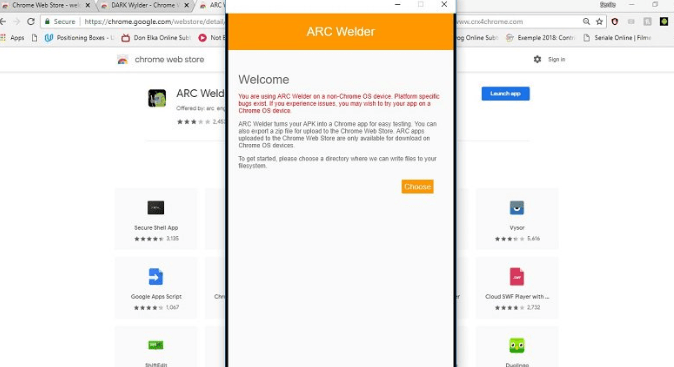 Google launched a beta application in 2015 to assist developers in testing their apps on the desktop. They also released an extension called Arc Welder that has extensive application support. This tool works by using sandboxing technology, which allows the dedicated Chrome plugin to execute the app in its native interface. Initially, it was only available to developers, as of now anyone can download the plugin and run their favorite Android apps in Chrome. Let’s take a look at how to install Arc Welder on Google Chrome.

The Arc Welder plugin is required to run your favorite Android app on your desktop. The following are the instructions to install the Arc Welder Chrome extension on Google Chrome.

It should be noted that Arc Welder is only designed to run in Chrome and will not work in any other browser. Additionally, it works perfectly in all Chrome versions running on other operating systems, such as Linux, Mac, etc., due to its cross-OS compatibility.

Note: If necessary, you can also install the Chromecast extension on Google Chrome using similar steps.

Since APKs are not available in the Google Play Store, you must download them from a third-party app store in order to run the apps on your desktop. Make sure the APK does not contain any malware before downloading. Always try to download from trusted third-party stores such as ApkMirror, ApkPure, Mobogenie, and others.

Tip: Check the user reviews before downloading to ensure that the apk is genuine and virus-free.

How to Run the Apps on Your Desktop

Follow the instructions to run the Android apps on the desktop,

You will notice that the app will load in a separate window. Once loaded, verify that it is operational and begin testing.

Does it Work on All Apps?

Regrettably, it does not. When we tested it, we discovered that it works perfectly fine for Messenger Lite and Twitter but fails to load Instagram. Animation and certain effects were a little sluggish in the apps that worked properly, but the overall experience was fine.

When it comes to the games, almost none of them worked. Arc Welder was successful in loading the home screen of some of the games before they failed to load. Others, on the other hand, failed to load completely. Unfortunately, PUBG Mobile players who want to play on PC must still wait for a better alternative to run the games in browsers.

Aside from these minor flaws, lightweight apps work flawlessly in Arc Welder. You will also find it extremely useful if you are a developer to test your apps. On the other hand, you can also set up and use a VPN on Google Chrome in the form of extensions.

How To Install and Setup IPTV On Android Box