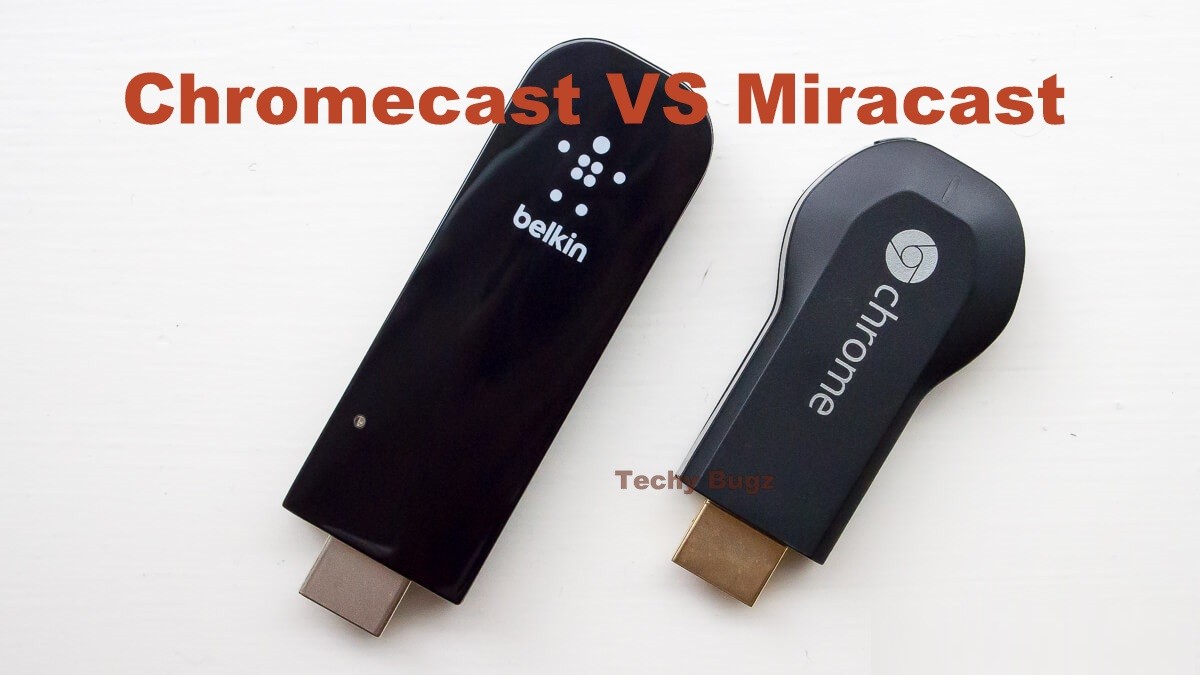 Chromecast is one of the most commonly used television accessories from the introduction of LED TV. Moreover, it has got fame as one of the best and amazing gadgets in today world because of its unbelievable features. If you are interested in casting your PC, desktop, Android device, Tablet screen to a large screen then Google Chromecast is the best device that was we suggest for all users. Nowadays, everything has changed because of the latest technology that cuts the HDMI cord, and they wirelessly integrate with the mobile and television. It’s all because of the Miracast, then the wireless video-sharing standard was introduced in the year 2012, and it is the first wireless casting device. Here we can see the Chromecast VS Miracast.

Basically, Miracast is not a brand or a specific product, it is just a wireless video sharing standard, which is developed by the Wi-Fi Alliance. Then they extended their WiFi Direct networking protocol for video streaming, and this group has developed the 802.11 protocols that interoperable under the WiFi name. Now the main aim of the Miracast is video-sharing interoperable across devices. Moreover, the Miracast can works directly by using the link of two supporting devices, like television dongle and an Android device, with the help of a dedicated peer-to-peer WiFi connection.

To use this device you need to have the recent WiFi radio, with that, you have to implement the Miracast protocol in their operating system. Moreover, this device can support both Android and Windows 8 devices and is enabled by all the manufactures, where some needs to update their drivers to enable Miracast. Then you have to check with your manufacturer if you are not seen the Wireless Display option on your device’s settings app. Here to check the features of Miracast, we used the Netgear Push2TV because it is one of the properly approved Miracast devices for using it in Amazon Kindle Fire HDX. The Netgear Push2TV is same as like the Apple TV, where a small box gets connected with your TV otherwise a receiver through an HDMI cable, which will connect your mobile device directly using the WiFi Direct. The Miracast device can also available in the form of dongles, which can be plugged directly into the TV’s HDMI port.

If you need to enable your Miracast on your compatible Android Smartphone or tablet, just got the Settings and selected the Display settings or select the Media Output settings, which is entirely depends upon your device model and you have to select the Miracast device range. In the WiFi access point, you can see any of the in-range devices will appear in the list. Once your Android device gets connected, it will directly mirror its screen onto the television, or to the receiver that set to the same HDMI inputs as the Miracast device. Moreover, the Push2TV and the other Miracast devices can easily transmit the data at the resolution of 1080p, and it will offer 5.1-channel digital audio, and it will make them ideal for just sharing videos and music on your television. Moreover, the Miracast is developed with the industry-standard H.264 codec so that it can support all format videos and even all the copyright-protected media.

Google Chromecast is the dongle that can get plugged into your TV or in the receiver’s HDMI port, and it plugged into the power outlet, and that uses your current WiFi to access the internet. Here we say that Chroemcast is a device, where Miracast is the Protocol which can be used by many devices that can support. In a first look, the Google Chromecast may look similar to Miracast, but the technology of those two devices are entirely different. In the beginning, the Chromecast is entirely focused on multimedia streaming sooner than the screen mirroring of Miracast. The Chromecast device does not have the ability of mirror content directly from your Android device to the dongle, apart from that it just pulls the content from the internet and just uses your mobile devices just like a remote control.

If once your device gets connected and running on any smartphone, tablet, or laptop, which get connected to any of the shared WiFi networks will be able to stream all the supported contents on your TV wirelessly. It currently offers the handful service that compatible with Chromecast, that includes the big names like Netflix, Hulu, HBO Go, YouTube, Google Music, and Pandora. When if you open any of these services app on your mobile device, where you can see the small TV icon located on the app menu bar. Just make a tap to have Chromecast automatically pick up the same stream from the Web for playback. Just use your mobile device as a remote control such as pause or fast-forward.

Here the Chromecast cannot able to wirelessly mirror your mobile device screen, and it allows you to share your Android device content such as games, files, and apps on your TV. The Google is just slowly bridging the gap between the Chromecast streaming control approach and the Miracast mirroring approach by just adding the mirroring capabilities to your Chrome browser, where you can easily send the browser tabs to your TV through Chromecast.