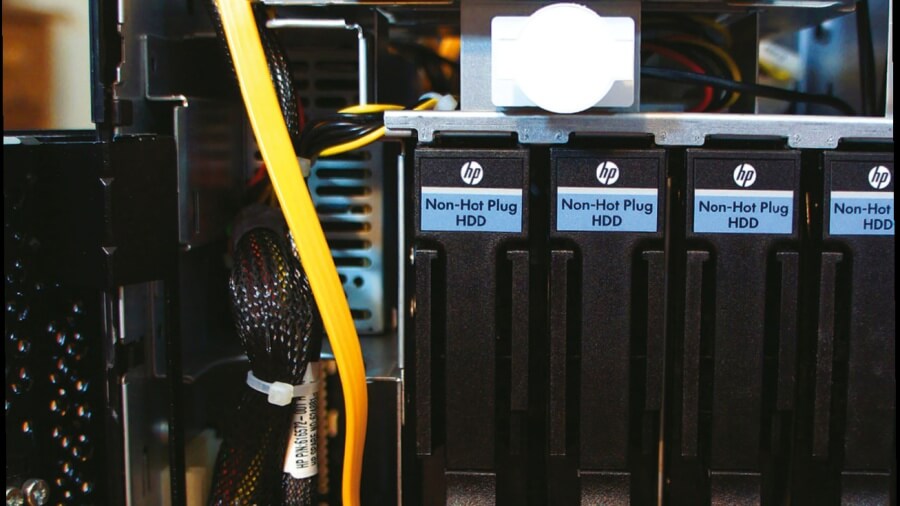 Home Server is the computing server located in the private residence, which provides services to the other devices inside or outside the household over a home network or the internet. The services may include file and printer serving, web serving (on the network or Internet) Media centre serving, account authentication, web caching, and backup services. Due to the low number of computers on the typical home network, a home server commonly does not requires significant computing power and can be implemented with a re-purposed, older or a plug computer. An uninterruptible power supply is sometimes used in the case of power outages which can corrupt the data.

Home Servers often run headless, and it can be administered remotely via the command shell, or graphically through the remote desktop system, which includes RDP, Webmin, VNC, Apple Remote Desktop, or many others.

1. File Server: File Server can be used when you are trying to share a multi-gigabyte file over the internet, or just wants to access to your network storage drive while on the go, Setting up the file server is also one of the most common uses of the server or NAS. The File servers are typically set up using either FTP/SFTP (File Transfer Protocol/Secure File Transfer Protocol) or WebDAV (World Wide Web Distributed Authoring and Versioning) protocol.

2. Personal Cloud/Backup: Backups have become the vital as we furiously charge towards the digital era, however, something as common as the drive crash, which can quickly destroy years worth of data such as important documents, pictures, videos, and more. As a result, having the backup server with free software such as Bacula for example to backup every system or having something to back up essential documents is quickly becoming one of the most typical uses of servers and NAS systems.

In line with the backups are personal clouds which allow the real-time backing up of the files into the personal cloud, which can be hosted on the home server or NAS. By using the free software such as OwnCloud, this is the easy way to have continuously synced backup protection for essential files without having to pay the monthly fees for a paid cloud service, such as Dropbox, Google Drive, or Box.

3. Surveillance: With a surge in the popularity of IP cameras, setting up the DIY home security system is easier than ever and many camera manufacturers would prefer you to sign up for their cloud services, those who don’t want to pay for the cloud service or feel more comfortable with their surveillance footage on the personally owned system can prefer the home server or NAS to serve the double duty as the surveillance system server.

4. Media / Entertainment: Another common use of the home server or NAS is using the media as a server. As servers and NAS systems typically have a lot of onboard storage, this is the perfect place to store the movies, TV Shows, Music, etc., for watching on the client devices such as computers, tablets, TV sticks and others.

It is the most common media and entertainment systems to install on the server or NAS is Kodi or Plex. This two software will allow easy organization of files already on the server or NAS’s shared folders and automatically download information about the content such as album/movie covers, descriptions, etc.,

Home Server Rack Before getting the server rack, it’s good to first understand its essential characteristics. Server racks are measured regarding rack units, usually written as “RU” or simply “U.” One rack unit equals 1.75 inches (44.45mm) in high, with the compliant equipment measured in the multiples of “U.”  Network switches are generally 1U to 2U, and servers can range from 1U to 4U, and blade servers can be anywhere from 5U to 10U or more.

Consider, to the width and depth of server rack, which is generally accepted to be the 19 inches for former and 600mm to 1000mm for the latter. Some server racks come with the adjustable rear brackets, though most rack mount servers come with an adjustable mounting kit that can be used as long as there’s sufficient depth for the server. You can set the rack based on your server capacity. You can also buy some ready-made racks based on your requirements.

The primary thing to consider while buying the Home Server case is to find the right size for your needs, and it should have the room for all your hardware and USB devices. But some of the cases offer much, much more spacious innards, muffled sound, lower temperatures, extensive water-cooling support, and fancy-schmancy tempered glass panels or RGB lighting are just the tip of the iceberg.

Things to consider while buying the Server Case

Home Server lets you access all your necessary files, photos, music, and more from all the computers in your home, from the home central server. Windows Home Server (WHS) is meant for your family needs or the use of a house or a small office. It allows you to centralize the essential documents and digital media files on one box and provides you with easy access from other machines on the network. It also has the ability to backup ten computers and restores them if needed. It acts as the media server, backup solution, document management, data recovery and lets you access what you need from anywhere there is the web connection. Using the personalized website address, it enables you to securely download and upload the data files.

Step 2: Now choose the drives, which are in the machine. In this case, there is only one. But if you have more than one drives, make sure they are listed. If you wish to add the additional drives at the later time.

Step 3: Then select the New Installation and accept the Microsoft EULA.

Related: How to Install Kodi on Windows

Step 5: Now it’s the time to give your Home Server a name.

Step 6: Again verify the hard drives, which will be formatted.

Step 7: It’s going to ask you again to make sure that all the data will be deleted from the drives.

Step 8: Now begin the installation process. The amount of time it takes to complete will vary between the systems. Count on the entire process taking the minimum of one hour and even longer.

Step 9: There is nothing needed from you during the installation takes place. The System will reboot several-time, and you can see different screens displayed while the process completes.

Step 12: Decide if you want to set up automatic updates or not.

Step 13: Choose whether you want to join the Customer Experience Improvement Program or not.

Step 14: Choose if you want to turn on the automatic Windows Error Reporting.

Step 15: That’s all there is to it.  You don’t have to leave the keyboard, monitor, or mouse to the server. The only thing you need to be connected is an Ethernet Cable running to your router. You can administer the machine from any of the computers on the network after installing the Windows Home Server Connector on your other machines.

To connect to the computers on your network to the server, you have to install the Windows Home Server Connector which is available as a separate download. You have to install WHS Connector to every available computer on your network in which you want to connect to the server. It connects your computers to the WHS, and allows for automatic nightly backups, monitors computer network health, and also allows you to remotely administer the server from your computer.

Step 1: You can also use the free program like the Virtual CloneDrive and mount the ISO and transfer the files to the flash drive.

Step 2: Before installing the connector on the XP, you need to install the Microsoft .NET Framework 2.0, and which will guide you through the process it needed.

Step 3: When you start the WHS Connector Setup, it will look for the Home Server.

Step 4: During the process, you have to enter the password, that you created for the Server.

Step 5: Choose whether you want your computer to wake up if it’s in sleep mode to back it up.

Step 6: When the configuration is complete, you can wake up the computer for backup between 12.00 and 6.00 AM. Also in this instance, We’re getting a message which one of the drives in the PC won’t be backed up. This is because it’s formatted as the FAT 32 volume and it will only backup drives formatted as NTFS.

Step 7: The Home Server Console icon sits in the system tray, and you can control some of its settings by right-clicking the icon.

Step 8: It will display your network health and shows the security warnings. In this, we can see one of the machines on the network as its firewall turned off.

Step 10: Once you are signed in, you can configure and administer the server and its different functions.

Step 11: Now the installation is complete, and we need to add all the latest updates from the Microsoft. Click on Start All Programs then Windows Updates. This also provides you with the latest server security updates and the Power Pack updates as well. The PowerPack updates add new features and provide fixes to known issues for the Windows Home Server.

By using this software you can make your computer into a server very quickly, It is recommended to read through the Apache HTTP server software documentation to learn about how to set it up securely.

You can install this software on Linux too, which is more secure, but a little bit complicated) the best combination would be a puppy Linux and Xamp for the server software. Puppy Linux can be loaded off a usb jump drive or CD So that you don’t need to uninstall the Windows, and you can boot the computer with one of those.

Almost any desktop or laptop made in the last ten years should suffice unless you are planning to run some intensive programs for many users (unlikely on a home network). The store is more likely to be an issue with the older systems, particularly if you want to store and share the Photos, Music, and Videos at home. If that is a concern, you may want to get the new hard drive. The freedom from worry about the most viruses is a significant advantage, and not spending the amount of upgrading Windows is a big plus too.

Chromecast Plex | How to Setup and Use Plex on Chromecast