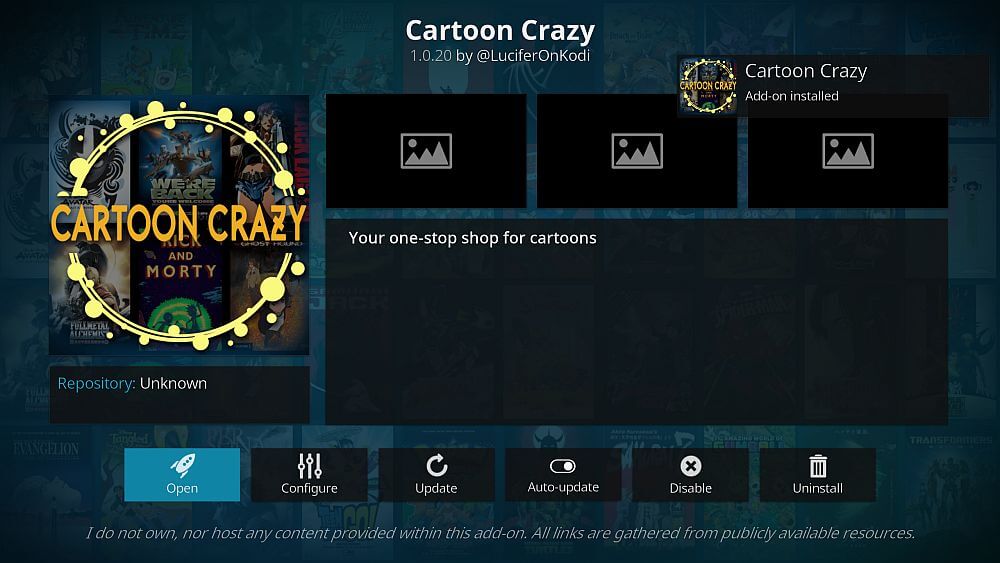 Cartoon Crazy Kodi Addon is one of the Top Kodi Addons which is primarily targetted at the children. It is the high-quality Kodi Addon for kids, which lets the user watch all the favorite Cartoon shows in no time. It is one of the largest multi-source Kids Streaming Addon for Kodi. It has a wide range of the source, there is much content to explore, and many users state that it is harder to find the cartoon content which isn’t in the Cartoon Crazy. It is recommended to use the VPN on Kodi if you are using the Kodi to view the content on any unofficial Addons. It is the biggest and the most ambitious third-party Kids Kodi Addon.  The Lucifer develops the Cartoon Crazy, and it is available in the Lucifer repository.

Just follow the given steps to install the Cartoon Crazy Kodi Addon in Kodi using the Lucifer Repository.

Step 1: Launch the Kodi app, and go to the settings.

Step 2: Hover over the Addons menu option and turn on the Unkown Sources if it is not already on.

Step 3: Click back to go back to the System page

Step 7: Now just Go back to the Kodi Home Screen and click on System

Step 8: You can see the Addons menu, Just click on the install from the Zip file

These are the steps to install Cartoon Crazy Kodi Addon.

Things you need to know about Cartoon Crazy Kodi Addon

Finding something that kids want to watch could be difficult, especially in Kodi, where there are plenty of addons are aimed at adult users. When the high-quality kid’s addon appears, it is usually greeted with great enthusiasm across many of the Kodi community. The Cartoon Crazy Kodi Addons one such addon. The Cartoon Crazy is announced as the largest multi-source kids streaming addon for Kodi. It has around eleven different websites, where it scrapes contents from as well as the whole bunch of additional features to explore.

Streamz TV Kodi Addon is one of the best Streaming Kodi Add-ons. You can watch all your favourite TV shows using the Streamz TV Kodi Addon. It is the new IPTV Addon which you can install on the Kodi for watching the live TV channels from all around the world. StreamzTv lets you watch all the Sports Channels, News Channels, Live TV Channels, Food Channels, Religious Channels and many other channels in both SD and HD quality. Most of the streams are working so that you can install it on your Kodi and enjoy the live streaming until it is up. It provides you with high-quality streaming content from all the available channels.

Live Hub is the Kodi Addon from StreamHub Repository. You can watch IPTV stalker, Edoctor, mobile TV, Swift Streams, India Sports, TV Online Plus and many more. Live Hub also provides you with the Live TV providers for free in Kodi. It also includes the IPTV scrapers and web scrapers. Live Hub Kodi Addon will always need to be on the latest version to continue to function correctly. Live Hub as its name indicates, it is primarily developed for live streaming. It is easy to use and provides you with a lot of options and channels for live streaming.

These are the top 3 alternatives of Cartoon Crazy Kodi Addon. Thank you for reading this post.

How to Install Google Play Alternative On Fire TV or FireStick