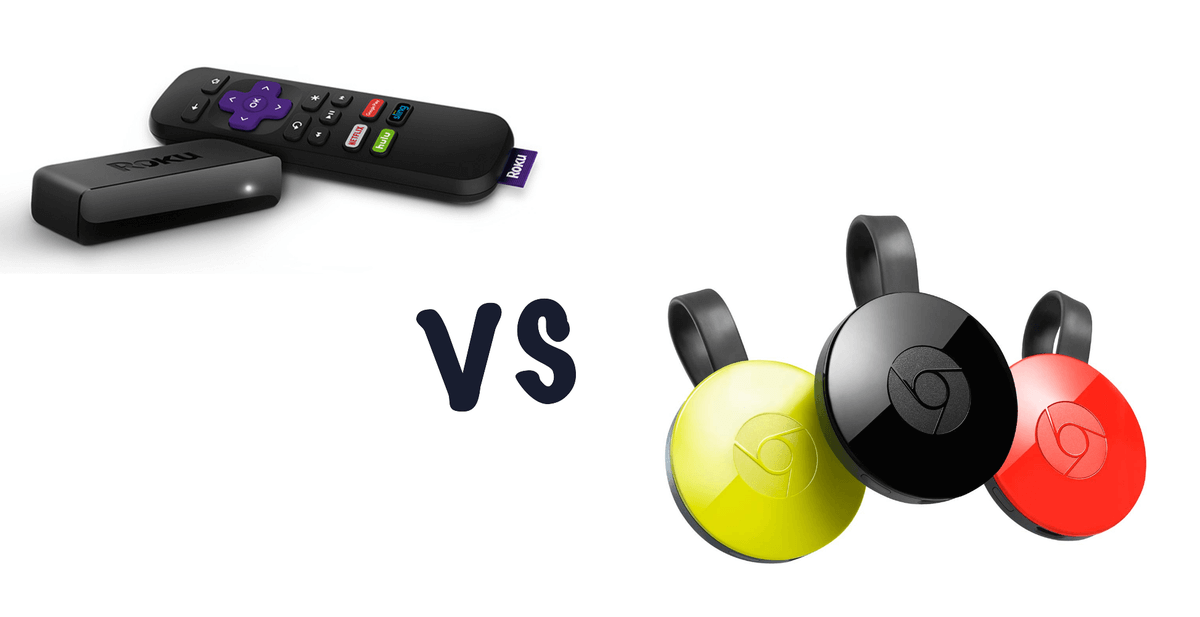 When it comes to streaming media devices, the choices are heavy and they have become so popular way to stream media content on TV. When Google introduced the first Chromecast two years ago, the competition for HDMI dongles is relatively very low. Now, the competition has become heavier with streaming devices like Roku, Amazon FireStick and much more. In this article, we are going to compare the Google Chromecast with Roku devices to find out which one belongs in your living room. In Roku, nearly six products (Roku Express, Roku Premiere, Roku Streaming Stick, Roku Express+, Roku Premiere+ and Roku Streaming Stick+) are considered as a direct competitor to the Chromecast dongle. Roku Ultra is the only product that isn’t considered as a competitor for Chromecast. Because Roku Ultra is a set-top box rather than a dongle. Check out below to know which is the best streaming device to use: Chromecast or Roku?

Out of six Roku Products, the cheapest product is Roku Express ($29) and the expensive product is Streaming Stick ($59). The standard Google Chromecast costs around $35 and the Chromecast Ultra costs $69. The average bill of the cable users (US) costs around $100 per month. While comparing with the cable bill, both Roku and Chromecast are very effective in terms of economy. Hence the users can purchase any one of the devices to stream their favorite media content.

Both Chromecast and Roku have to be connected to your TV through the HDMI port. Among the six Roku products, Roku Express+ is the only device which offers A/V ports along with HDMI ports for the TVs which doesn’t have HDMI ports.

Since Chromecast simply mirrors your device screen on TV, it doesn’t come with any remote. All the functions of Chromecast are controlled from your smartphone, tablet or computer. In contrast, all the Roku devices come with a well-designed remote control. The first three models of Roku comes with simple remote control. Whereas, the other three models come with a voice-enabled remote control. The company also sells Enhanced Voice Remote Control and Gaming Remote separately. Moreover, Roku users can download the Roku app on platforms like Android and iOS. By downloading the Roku app, the users can control their Roku device right from the smartphone.

According to the developers of Roku, users can install nearly 500,000 channels on their device. It offers numerous collection of private channels and some of the channels are Netflix, BBC iPlayer, Hulu, Spotify, Amazon Video and much more. Check out complete Roku Channels List. In contrast, Chromecast doesn’t offer any channels. It let you mirror the apps on your device screen to TV. If you are mirroring your android device screen, it will reduce your battery life and you can’t use your device while the casting is taking place. When comes to the computer, Chromecast doesn’t mirror some of the apps.

Out of the two Chromecast devices, Chromecast Ultra supports 4K. But before buying a Chromecast Ultra, you have to check whether your TV supports 4K or not? Then, you also should remember that some of the popular streaming services will charge more money if you want to stream the video in 4K. On the other side, out of six Roku streaming products, three products (Express, Express+, and Streaming Stick) offers video at 1080P HD resolution and other three products (Premiere, Premiere+, and Streaming Stick+) offers video 4K resolution along with HDR (high dynamic range).

Chromecast vs Roku – Which One Should You Choose?

The final decision will depend on the environment that you live in and the environment that you want to make. If you want to mirror your occasional movies, TV shows or sports from your device to TV, then you should go for Chromecast. Or if you want theatre-like atmosphere on your home without spending too much money, then you should go for Roku. Roku device is available at $40, whereas Chromecast is available from $35. The cost of both devices is relatively low while comparing with an average cost of cable user.

Thanks for reading this post. For further queries and feedback on Chromecast vs Roku, please comment below.

What is iFlix? Everything You Need to Know About iFlix

What is Stremio? – Discover, organize and Watch Video